This article is reprinted with permission.  The original with lovely photographs can be read here.

TERRA ALTA — Possum Tail Farm nestles quietly in the hills of Preston County.Colorful cattle graze on the lush green grass, while bunnies hop around and the hens congregate.It’s picture-perfect, but there’s something different about the way the livestock is raised here.“We’re trying to do the things that make sense to us, and we’re raising it the way we would want our meat to be raised — that’s really our focus,” said Brian Kahly, who owns Possum Tail Farm along with his wife, Jennie.“This is what I want to raise for myself to eat.” 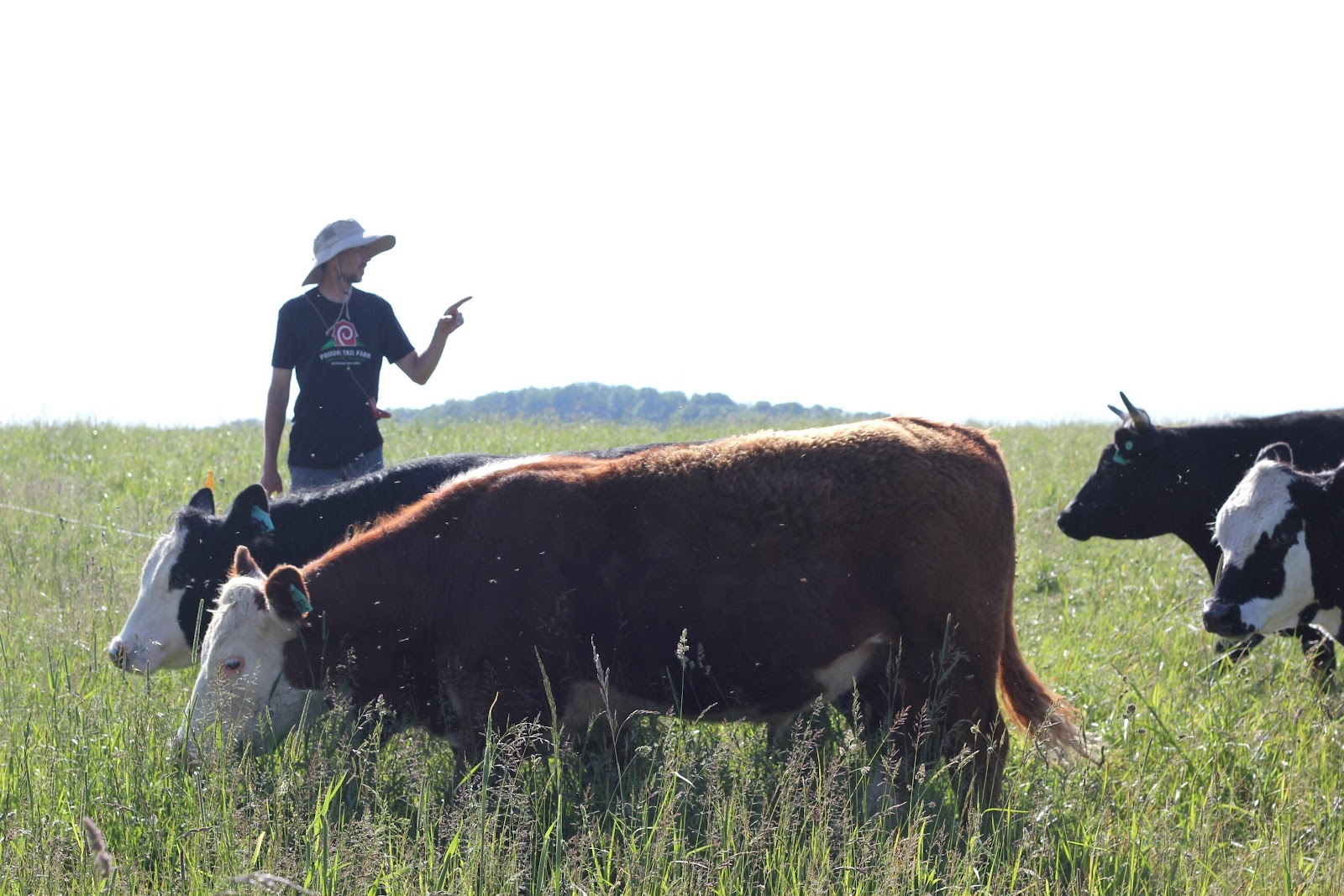 All cattle in West Virginia are pasture raised, according to figures from the state Department of Agriculture, but not many are raised organically. And certainly not all are switched from one pasture to the next while they graze. Possum Tail is one of only two farms in the state that is Certified Naturally Grown.The life cycle of livestock is important to the Kahlys, and they think — with a trendy focus on local food — that it’s important to their customers, too.That’s why a few days ago, when they held a community potluck dinner, they also offered a tour, so visitors could walk the farm and see exactly how their food is raised.The cows, for example, rotate pastures once a day and live herbicide-, pesticide- and fungicide-free. They only eat grass and hay that is free of synthetic fertilizers and receive no grain, hormones, chemical de-wormers or antibiotics.“I started buying the meat from [Jennie] because I liked the way the animals are raised,” said Melissa Connell of Morgantown, who showed up for the dinner and tour.“It’s costly, but it’s worth it to me that they have a good life.”By rotating the pastures, the animals graze on fresh grass each day and the grass is given more time to replenish.“The more frequently you move the cows to another piece of pasture and let the pasture rest, the better quality the forage and more productivity you’ll get off that given area of land,” said Deputy Commissioner of Agriculture Joe Hatton, who practices rotational grazing on his own farm.Cattle in the U.S. are often raised on big open pastures, and rotational grazing is a niche practice.“One of the really interesting aspects of rotational grazing is that you get to know your livestock a lot better,” Hatton explained.As Brian approaches the cattle, they come toward him, ready to rotate their pasture without the need for him to herd.“Animal safety and human interaction is a great concern, and if we can use whatever means to go and help the cows be happier and calmer, it makes for a lot safer environment for the farmers to go and work with the livestock,” Hatton said.Brian and Jennie moved to the nearly 150-acre farm six years ago from State College, Pennsylvania, where the lack of organically fed meats in their area frustrated them.Brian had purchased the land from his grandparents several years before and expected to eventually retire there, though the move back came much sooner.He left his defense industry computer programming job and Jennie left her teaching career to turn the family farm into a livelihood.Their children, Arianna, 14, and Aden, 4, are the fourth generation on the farm and help with daily chores.The rabbits, which are bred and raised on the farm, are the only animals on the farm that are not certified naturally grown. Their grass is often supplemented with conventional pellets. Arianna moves their shelters to fresh grass twice a day.In addition to cattle and rabbits, Possum Tail Farm raises chickens for both eggs and meat.The chickens are raised in shelters that are moved to fresh grass once a day.Connell first purchased eggs from Possum Tail before learning about the livestock. She now purchases from the farm regularly.“You cook the grass-fed a little bit differently,” she said. “Once we got used to it, we couldn’t go back.”The flavor is a little different, too, she added.“The most important item in a person’s kitchen if they’re going to have pasture-raised meat is a thermometer because it’s so temperature sensitive,” Jennie said.Because Possum Tail harvests and processes all poultry on the farm, the Kahlys and others believe the animals’ stress levels are lower. The cattle are butchered about 20 minutes away in a USDA facility.“They experience, hopefully, less stress,” Jennie explained. “There’s way less time between the time they’re taken from the field to the time they die. Normally, chickens are packed up into a truck, hauled away, then left in crates until they’re butchered. That whole experience is extremely stressful for the animal. Same way with beef.”Generally, grass-fed meat is higher in vitamin E and omega-3s, and it’s more nutrient dense, she explained.On the opposite end of this model, is an Animal Feeding Operation, or AFO.An AFO is an agricultural enterprise where animals are kept and raised in confined situations, according to the U.S. Environmental Protection Agency. There are about 450,000 AFOs in the U.S. Rather than the animals seeking out feed in pastures, feed is brought to them.“I would just like to encourage people who buy from farmers to visit the farm,” Jennie said. “If they’re raising animals, see the whole life cycle. Maybe what they’re doing in the field looks great, but how are they raising the babies and the breeder?”Arianna and Brian led the group to each of the animals’ enclosures, allowing them to ask questions and experience the rotational practices. At one point, Arianna stopped to feed the laying hens and collect their eggs. They came running to greet her as she approached, pausing to round up one that had briefly escaped. 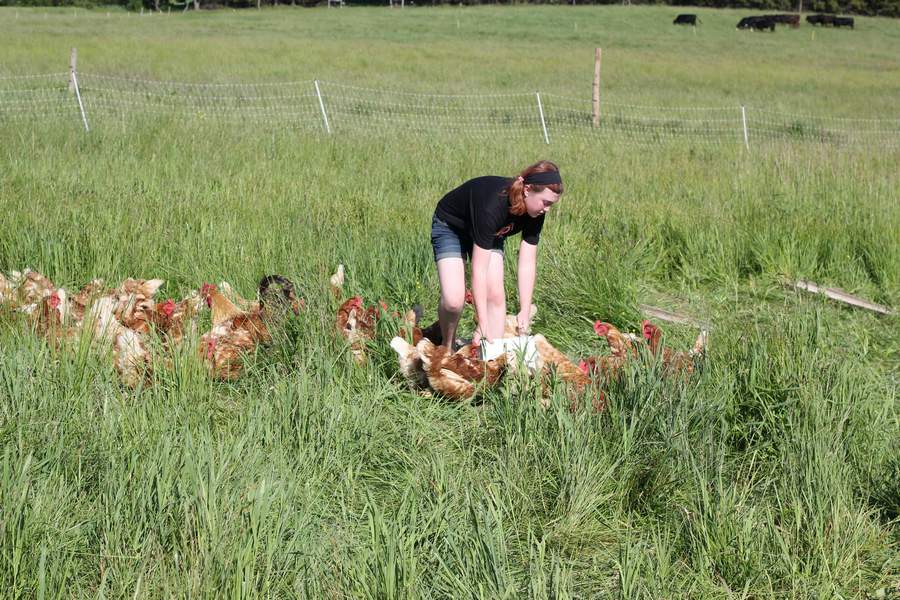 “When you get to know your farmer, you get to know your food,” Hatton said.“Locally raised beef or locally raised produce is an opportunity for the consumer to get to know our farmer, and that’s the most important lesson of all.”Possum Tail Farm currently delivers to Morgantown, Oakland, Maryland, and the Washington, D.C., area. Their products may be purchased online at barn2door.com/store/5NzL5.Reach Jennifer Gardner at jennifer.gardner@wvgazettemail.com, 304-348-1230 or follow @jenncgardner on Twitter.